How do they even manage to DO that, mix humor that funny and angst that devastating? Freaking great episode that made me both laugh and scream out loud.

freya922
Rating: PG-13
Pairing: None - Gen
Word Count: 2,029 words
Warnings: Possession and psychological horror related thereto.
Author’s Notes: Written for the 2015 Summergen Fic Exchange. I realized I never posted this story after Summergen, and it's rather relevant to the events of the Season 11 mid-Season finale and premiere! So...now seemed like a good time to post.
Summary: The End!verse from Sam’s POV.

Whoever you are, I am so grateful that you will be spending time and energy to create a fanwork for me. I enjoy all kinds of fan creations, and hope one of my prompts will spark your imagination. Feel free to ride that inspiration to wherever it leads - I don't have any specific expectations and can't wait to see what you come up with.

And I love how summergen breaks up the doldrums of the long summer hellatus. :)

The cat was just hanging out up where I display the Impala. Hubby placed Dean just right, and this was the result! Monster cat! Note that her front paws are resting on the Impala's roof. :) 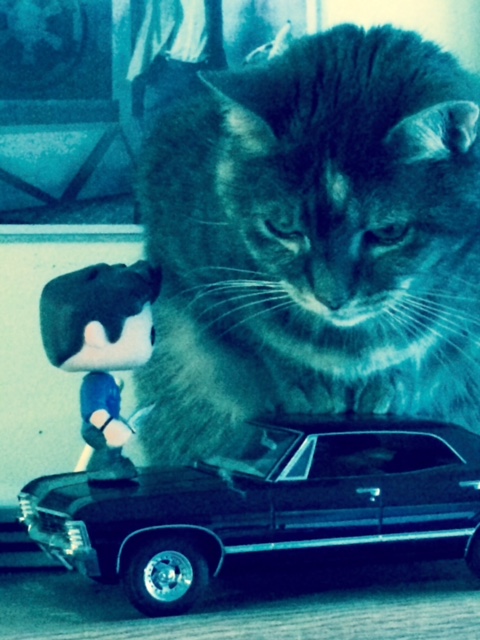 Supernatural is everywhere... at least my experience of the planet is that it is. For example, I was buying some milk at the grocery store and I see this: 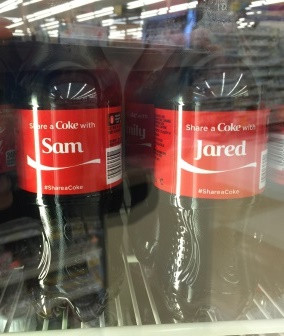 Sunday was incredible. Again, we stumbled upon people out in public spaces: Tahmoh, this time. And were at the very head of the line for Mark Sheppard's photo op so saw Misha's antics up close as he finished up his session. Top of the list, though, was our photo op -- my first ever -- with J2. I was so nervous I had to kind of disassociate to get through it - weird as that sounds! Right after, I'm like: "Wait! Did he touch me? Did I touch him? I don't remember!" I had a strange 10 minutes of feeling dazed, then sat down and burst into tears. I guess that's understandable, right? I had just stood there, next to the worldly embodiment of Sam and Dean -- as close as we'll ever get to those characters in this realm. I felt totally overwhelmed, and elated, and griefstricken, and a bunch of mixed up stuff. So much you wish you could tell them that you'll never get to, you know? But also - just overjoyed. In the photo I look REALLY happy. (I was next to Jensen and my BFF was next to Jared.) I didn't even really LOOK at them - so overcome was I. Wow.

After that, we had the JDM panel - he was amazing, so blown away by the whole Con experience. Then Jared and Jensen put on a fantastic panel of their own. We ended our evening with Tahmoh (who my BFF and I have loved since Battlestar Galactica), and then a Jason Manns concert. Gods, he has a gorgeous voice. We had hoped Jensen might show up there, and it appeared he had meant to. But the concert got pushed back a bit, the boys had to get on their plane, and Jared was a little bit sick... so it didn't happen.

In any case, this Con was such a high point...! I am so grateful that somehow the fates aligned so that I could be here. I'm a bit fearful of the let-down that is inevitably coming as Real Life very quickly rears its demanding head. But for this morning... I'm just going to be grateful and bask in the afterglow.

I am blown away. Not only did I stumble upon Jared out in a public space where I don't think he was supposed to be (if the frantic expressions of the body guard types were any indication), but then I stumbled upon a Baby replica parked on the curb outside the hotel.

That would have been enough. Plus Gil singing "As Times Goes By" at his panel so beautifully it made me clutch my heart. But then the Saturday night concert was freaking EPIC.

Louden Swain performed at the top of their game. Then Gil sang. *thud* Richard sang. Mark S. played the drums like a freakin' rock star. JDM came out with Samantha Smith and Jensen! Jensen sang like a freakin' angel. First in beautiful harmony with Louden Swain and Richard. Then his own number: "Sister Christian," which he NAILED. The crowd went insane. Multiple times. By the time "Carry On Wayward Son" was sung, everybody was on that stage, including Mark Pelligrino, Sebastian Roche, Matt Cohen... and then they all came back again for an encore; they sang "With a Little Help From my Friends."

Too tired for a coherent report, but I can tell you one thing. I am SO GRATEFUL that I was here for this. I've never seen anything like it, and I will never forget it.

And tomorrow is J2 day!

freya922
Pairing/Rating: Gen; PG-13
Warnings: Adult language, angst
Word Count: 4,600
Summary: After the family moves on short notice, Mary realizes their new home is inhabited by a ghost with an alarming fixation on three-and-a-half-year-old Dean. She has to take care of the situation while keeping John in the dark.
Author’s Notes: The title “Lady Madonna” refers to the Beatles’ song of the same name about an overwhelmed mother, as well as to Mary’s sacred status as mother of Sam and Dean. (The song was also a track on the “Hey Jude” album!) Heartfelt thanks to my amazing, supportive, and insightful beta,

scullspeare. Written in response to a fantastic prompt from

sophiap during the 2014 summergen fic exchange: “Mary is doing her best to be 'normal.' She's got a nice, normal husband, and a nice, normal toddler. So, what's she supposed to do when her supposedly nice, normal house turns out to be haunted?” I couldn’t believe how much I enjoyed letting someone else’s idea capture my imagination, and I hope you enjoy the result.

“Mommy, I don’t like that night lady,” Dean said in his high, sweet voice. He chased some soggy Cheerios across the laminated Batman placemat in front of him, pinching them between his thumb and index finger before popping them into his mouth.

Mary, wearing cut-offs and one of John’s old Metallica t-shirts, was building her husband a turkey and Swiss on rye at the kitchen counter. At her son’s words, she stilled.

Dean, spooning sugary milk from the bottom of his bowl, didn’t look up. “That lady that talks to me at night.”

It's January 3rd, Tolkien's birthday! Please join me in the traditional raising of a glass and toast: "To the Professor!"

Because there are gazillion parallels between The Lord of The Rings and Supernatural, which the show itself has highlighted in recent years... Not only mention of the Ring...or Charlie reading her dying mom "The Hobbit"...or the fact that Dean's favorite song (Ramblin' On) is a Led Zeppelin song featuring a bunch of LOTR references...  but the fact that Sam and Dean's journey has come to resemble Frodo and Sam's much more than it ever did Luke and Han's. (I take it the Star Wars characters were a bit of a template for the brothers at first, but Supernatural became much too myth laden for that to suit over the long term.)

I have loved LOTR with a quiet passion forever, and now I love Supernatural the same. If anybody mistakes this little CW show for fluff, they are tragically, terribly wrong. It is a thing of sublime beauty and power.

So... to the Professor! And to Supernatural, too!

Eeeek!
What horror fiction character scares you the most?
Reply 54
That freaking clown from Stephen King's "It."
Collapse